Now in its 17th year, Design Miami/ chose the theme of “Human Kind” as a means to show how design can make the world a better place. Part of that approach includes taking the design fair high-tech, said fair CEO Jennifer Roberts, who noted three major changes this year: the launch of a mobile app that provides the option of exploring the entire show digitally, the ability to pay in crypto currency, and the chance to purchase non-fungible tokens, better known as NFTs.

The fair runs through Dec. 5 at Pride Park, across from the Miami Beach Convention Center, and marks the debut of curatorial director Wava Carpenter.

“The practice of design, at its heart, has always aimed to create a better future,” Carpenter stated. “But in recent years, as the global challenges that humanity faces have approached existential proportions, the future that designers envision increasingly demands a fundamental reorientation of what it means to be human in this world, calling on all of us to become better stewards of nature and of each other.”

Toward that end, certain gallerists took a kinder, gentler approach to their design, said CEO Roberts. Case in point is the Jason Jacques Gallery, whose owner says, “We’re all about love.” His booth at the entrance to the fair (G/05), features a 15-foot-tall geodesic dome designed by Rem Denizen as a temple for an Ayahuasca ceremony. The model at the fair is made from a single grand fir tree and lists for $65,000. For those who want something else, Jacques said, Denizen will build the dome of your dreams — “in any form, even in gold” — but size and materials will dictate the commission price.

There’s so much to like about the booth designed by this gallery from Clinton Corners, New York — especially a five-foot-long ceramic isolation lounge in the shape of a giant alien’s mouth, complete with tongue and tastebuds. Rows of teeth line the interior roof and dozens of eyes rotate in their sockets sprouting from the top. The curious creature is the brainchild of Nick Weddell, a 27-year-old wunderkind from Austin. After being diagnosed with Type 1 diabetes at age 11, Weddell took comfort in creating an imaginary alternate universe he calls Zeefromzeglop. The booth is crammed with creatures from that planet, in the forms of hand-hooked rugs and a slew of ceramic objects, including the isolation lounge, which he calls Gorgon. The lounge, along with a companion ottoman, lists for $55,555.

The manmade and the functional

Ceramic objects star in this year’s show. That’s because “human beings have been using clay for utilitarian purposes since the beginning of time,” noted Miami gallerist Mindy Solomon. “That relationship between the man-made and the functional and to the material that comes from the earth that is prevalent in every culture connects to the theme (Human Kind).”

Her booth (C/12) incorporates a secondary theme of geometrics and includes work by John Gill, Kelsie Rudolph and Minkyu Lee. Gill is a renowned artist and professor whose ceramics were exhibited at The Metropolitan Museum of Art in New York earlier this year. Rudolph, a millennial from Montana who has exhibited worldwide, created several ceramic chairs, vases and vessels, many with checkerboard or other glazed geometric designs. Although the third artist, Lee from Seoul, Korea, also works in clay, the gallery opted to promote his Yellow Butterfly Chair, made of maple wood, with a seat and back that resemble butterflies in flight.

The Southern Guild of South Africa (G/12), designed its booth to look like a rustic studio and offered a variety of ceramic totems and pots. Works by Zizipho Poswa, even with prices ranging from $60,000 to $75,000, were in high demand. Two of her larger stoneware works sold before the doors opened. People anxious to collect her works tried to wheedle their way into the fair in advance of the VIP preview.

Poswa and fellow South African artist Andile Dyalvane were slated to attend the fair. They actually were en route to the airport when they had to turn around due to the latest travel restrictions over the omicron COVID-19 variant that was discovered in South Africa, McGowan said.

According to sales manager Jacob McGowan, just getting the artwork to Design Miami/ was an odyssey. First the country was rocked by riots in July after former President Jacob Zuma was imprisoned for contempt of court. The following month, a cyberattack on the South African Port of Durham created chaos with shipping. Just days before Design Miami/ was slated to open, the United States banned travelers from South Africa after health officials there announced the discovery of the omicron variant.

“Thank God we got here the day we did,” McGowan said. “We landed and omicron hit.”

He’ll worry about his return travel plans when the time comes. For now, he’s just happy to be in Miami Beach, where his gallery won the Best of Show Award for best gallery presentation.

Other designers are all about the sensual, human side of design.

Bradley L. Bowers designs paper lamps whose flowing shapes evolve through stream of consciousness. Bowers, who used to operate a studio in Miami, won Design Miami’s award for Best Contemporary Work. Each lamp is unique and sells for $4,200 to $8,500 at The Future Perfect (G/10). “I want my friends to be able to buy them and not have to eat Ramen for the rest of the month,” Bowers said, laughing.

Harry Nuriev (C/02) created a comfort cocoon that he calls The Bedroom with its shiny silver sheets and mood lighting. Apical Reform & Miami-based ZEEL Studio (C/19) teamed up to provide rest for the weary. Their Emotional Rocks seating incorporates minimalist-style benches with fiberglass fashioned into smooth rocks, the kind found in zen gardens.

Daniel Arsham, an artist and designer with Miami roots, also focused on rocks. He teamed up with Kohler, of kitchen and bathroom fixtures fame, to create a limited-edition sink (X/06). The Rock.01 sink resembles a rock formation and is made using 3D printing. It is available in an edition of 99.

The Collectors Lounge, immediately adjacent to Maison Perrier-Jouët, features one of the most evocative interiors. Sponsored by AIG, the 2021 Collectors Lounge Designers Commission by BADG (Black Artists +Designers Guild) is a study in subtlety.

Brooklyn-based designers Leyden Lewis and Danielle Fennoy took a low-key approach to a powerful subject. They want us to reflect more on what we see, especially when it comes to race.

From the message at the entrance: Your Eyes Are Open Do You See? to the camouflage design on the interior walls, the designers are playing on that old chestnut that “all Black people look alike.” Fennoy, founder of Revamp Interior Design, titled the exhibit Blackouflage.

Even the seating carries a coded message. Several couches dot the room. They are enclosed in acrylic capsules that provide privacy and a bit more. Lewis, who heads Leyden Lewis Design Studio, said the stylish seating capsules were deliberately designed to resemble one-way mirrors. At once elegant and treacherous, those mirrors are reminiscent of an interrogation room or perhaps dressing rooms where store owners once spied on people they suspected might shoplift.

“The history Black people have of being looked at as ‘What are they up to?’ — now to use the same materials and bring light and beauty, turns it on its head,” Lewis said of the material he and Fennoy chose to provide an oasis of calm to Design Miami/ collectors.

Sun Dec 5 , 2021
Eliza’s Bedroom RAY MAIN Calling all the romantics at heart, Henry’ Townhouse is the hotel for you. An oh-so-opulent boutique hotel that sits in the heart of Marylebone, London, it is the former residence of Jane Austen’s favourite brother Henry. And this stately era proves to be an influence on […] 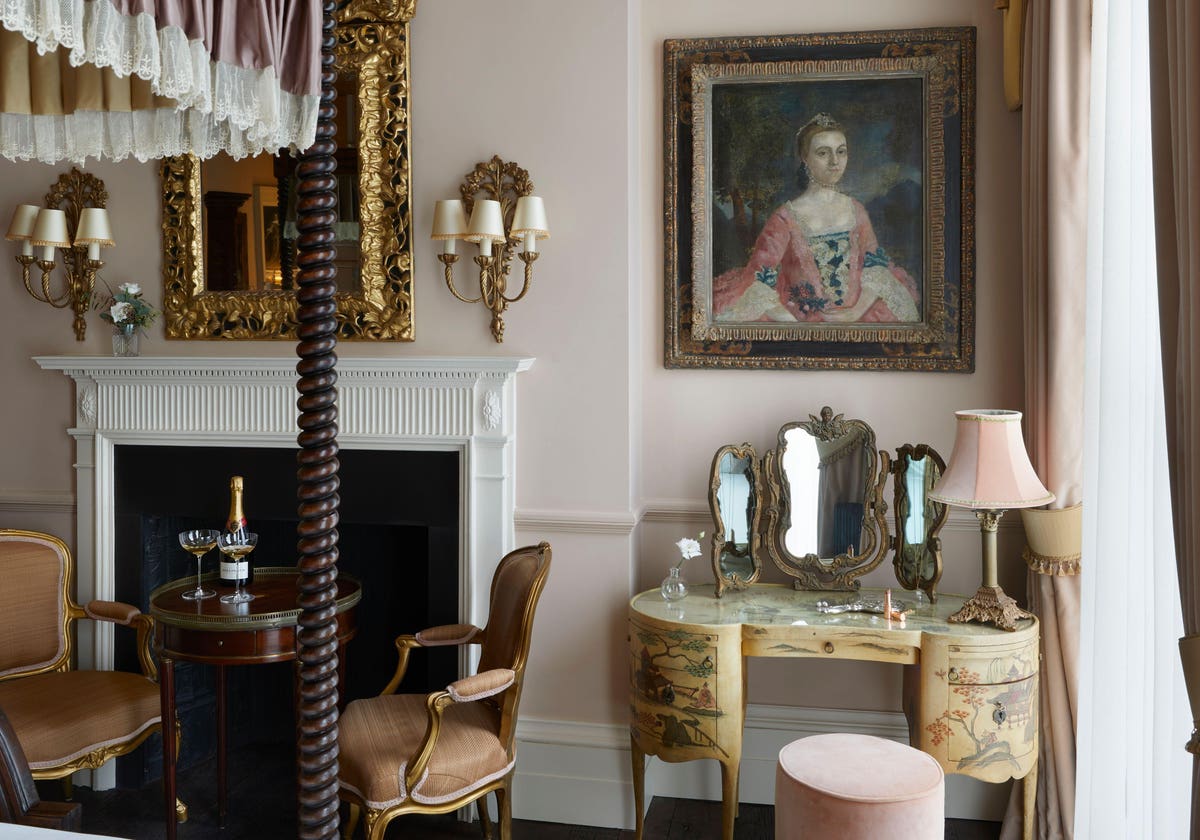