“Home Town” stars Ben and Erin Napier have big news: They’re expecting a baby girl! The couple will welcome their second daughter in May, who will join big sis Helen, who’s now 3.

And coincidently, Ben and Erin aren’t the only Napiers who are expecting. In the Season 5 episode “Family Values,” we also meet Ben’s brother Jesse Napier and his new wife, Lauren, whose baby is due just three weeks after Erin and Ben’s. It looks like these two couples will be able to raise their little ones together, so it’s a good thing Jesse and Lauren have just bought a house not too far from Erin and Ben in Laurel, MS.

Now, all that’s left to do is to fix up the home so it’s baby-ready, but this is easier said than done.

These newlyweds had bought the home for the low price of $55,000, but they found it has a termite infestation. This is bad news, especially since they have a budget of just $145,000 to get rid of these pests and fully renovate the house.

Yet Erin and Ben manage to purge the pests and upgrade the property for a mere $125,000. Here’s how they pull it off, which might give you some new ideas for your own place, too.

Bring back some ’90s style with some teal

Erin knows that Jesse and Lauren like deep, saturated colors and retro designs, so she tries to incorporate dark colors to create the perfect look.

So, on the outside of the house, Erin chooses a deep teal (which she matches with the kitchen cabinets) and then an even darker teal for the trim. The color gives off a subtle retro vibe while still feeling fresh. It’s a bold look, but it’s perfect for Lauren and Jesse.

To add to the dark theme of this home design, Erin paints the master bedroom a moody green-gray black.

“I love rooms painted dark because of the way the furniture stands out against it,” Erin says.

Erin adores the color, but she knows that the tone is a bold choice. She doesn’t want to overpower the rest of the room, so she chooses curtains that are a bit more subtle.

“I wanted the curtains to just kind of be quiet,” Erin says. “So they’re pretty neutral, but they still have a pattern.”

The creamy curtains work great, framing the windows and bringing some brightness to this dark room. Erin proves that painting a room dark isn’t as risky as it seems, as long as you include some lighter accents for balance.

Use stained glass on cabinet doors

Stained glass was once a popular home feature, but now it’s a bit dated. People want large, clear windows that will let in natural light. So when Jesse gives Ben a beautiful stained-glass piece Lauren’s grandfather made, he decides to use it as something other than a window.

Ben builds a wood cabinet for the dining room and uses the stained-glass piece as a beautiful cabinet door. It’s a great way to display the piece without replacing a window.

It’s a smart addition because Jesse and Lauren can use this extra storage—plus the colorful stained glass brings some personality to the room.

“It’s going to be a really useful piece for them, and it’s beautiful,” Ben says of the finished cabinet.

Wood paneling can work as a backsplash, too

Many homeowners want a bold tile backsplash for their kitchen, but Erin can’t find one that feels right for Jesse and Lauren. So she decides to use V-groove wood paneling instead.

Erin knows this paneling look is a little different, but she likes it for this reason.

Choose tile that takes you away

Erin and Ben turn a too-small master bedroom into a luxurious master bathroom. They want to make this space feel relaxing and warm, so when it comes time to pick out a shower tile, Erin has a great idea. She chooses dark-green, hand-painted Spanish tiles to match the deep color theme of the house, plus the tiles are sentimental as Erin knows they’ll remind Jesse and Lauren of their honeymoon.

“This house that they rented in St. Augustine had beautiful hand-painted Spanish tiles,” Erin says. “I wanted to give them a pretty Spanish tile paying homage to their trip to St. Augustine.”

It just goes to show that there are different ways to make the bathroom feel like a getaway.

The post Erin and Ben Napier of ‘Home Town’ Have Big News: Can You Guess? appeared first on Real Estate News & Insights | realtor.com®.

Thu Apr 15 , 2021
JERSEY CITY, NJ – With the Jersey City Planning Board’s approval, developers will convert a pair of vacant lots in Jackson Hill into a combination of retail and apartments including a rooftop deck.  Designs for the mixed-use building at 124-126 Martin Luther King Drive contain two ground floor storefronts and […] 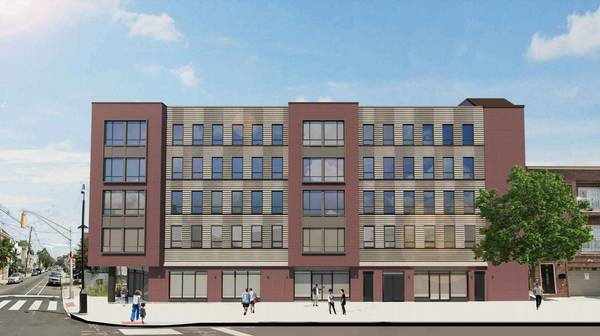