Interior designers often find inspiration in the architectural style of the properties they are renovating. But in the case of this oceanfront home in Southampton, the architecture was so distinctive that it would have been impossible not to acquiesce to it. “I let the house tell me what it needed,” says Manhattan-based designer Wesley Moon. “There were a lot of really strange details, like windows that lean forward, off-center skylights, and also a play on heights that was really interesting.”

Built in the early 1980s by Norman Jaffe, an architect who achieved renown through a series of sculptural Hamptons residences, the home looks like a jagged companion to the sand dunes surrounding it, and was cleverly named Xanadune. Its walls are made of cut boulders and glass panes, many of them steeply slanted to follow the angle of the monumental shingled roof. Its owners, a couple with four grown kids, wanted to update the home and create an easeful atmosphere reflecting the colors of the seaside landscape. “We bought the house because we fell in love with Jaffe’s architecture,” says the husband. “The interior combines multiple levels with a wide array of geometric shapes throughout. The living room is dramatic with its soaring ceiling, while the lower bedrooms are cozy and inviting.”

One of the most significant changes Moon made, in addition to renovating the kitchen and bathrooms, was refinishing 12,000 square feet of oak panels that cover many of the walls and ceilings of the home. After a monthslong process that involved stripping, bleaching, wire-brushing, and refinishing the formerly tawny wood with a flaxen stain, the property acquired a breezier and more modern feel. “I wanted a contemporary space, not an ’80s revival,” says the designer. “The house was so contemporary when it was built, I thought I’d continue in that spirit.”

For Moon, who studied architecture at Georgia Tech and worked at two major interiors studios in New York City before starting his own practice in 2008, choosing the furniture for this unusual dwelling was not as arduous as one might think. “Each space is very unique, so there were not that many options in terms of layout,” he says. “I did have to be careful about making sure the proportions were right.” The master bedroom, for example, isn’t rectangular and has only one uninterrupted wall to place the bed against. But the main living area, an extensive space with ceilings that rise up to 30 feet, offered myriad possibilities. To create a sense of intimacy amid such vast volume, Moon designed cozy side-by-side parlors, taking advantage of a sunken section next to the fireplace. One has a set of oyster-hued loveseats with wraparound wooden legs; the other has a thickly structured pillowed sofa upholstered in nude leather and a velvety sand-hued fabric.

“I picked pieces that were either architectural or had a detail that you may not notice at first,” says Moon. “As for the colors, I looked to the beach and brought that palette inside.” References to the sand and the seashells that surround the property are seen throughout the home, especially in the dining room, where an elongated cast-resin table shimmers like a conch, as does the crystal and molten-glass chandelier above it. Right outside is a deck with a fire pit and light teak armchairs. “We usually have a full house of family and friends during the summer and wanted to create a welcoming, relaxing atmosphere,” says the wife, adding that it was important for guests to feel they could “flow” through the common areas of the house. “The overall design is very cohesive—it encourages social interaction and maximum fun.”

Go Inside a Revitalized Architectural Marvel in Southampton

Sat Jul 11 , 2020
Photo credit: Right: Lucy Schaeffer Photography From House Beautiful Above: Before and after Modsy designers worked their magic on the previous tenant’s bedroom to create the perfect room for me. When I decided to move back to New York City and into a three bedroom apartment with two roommates, I […] 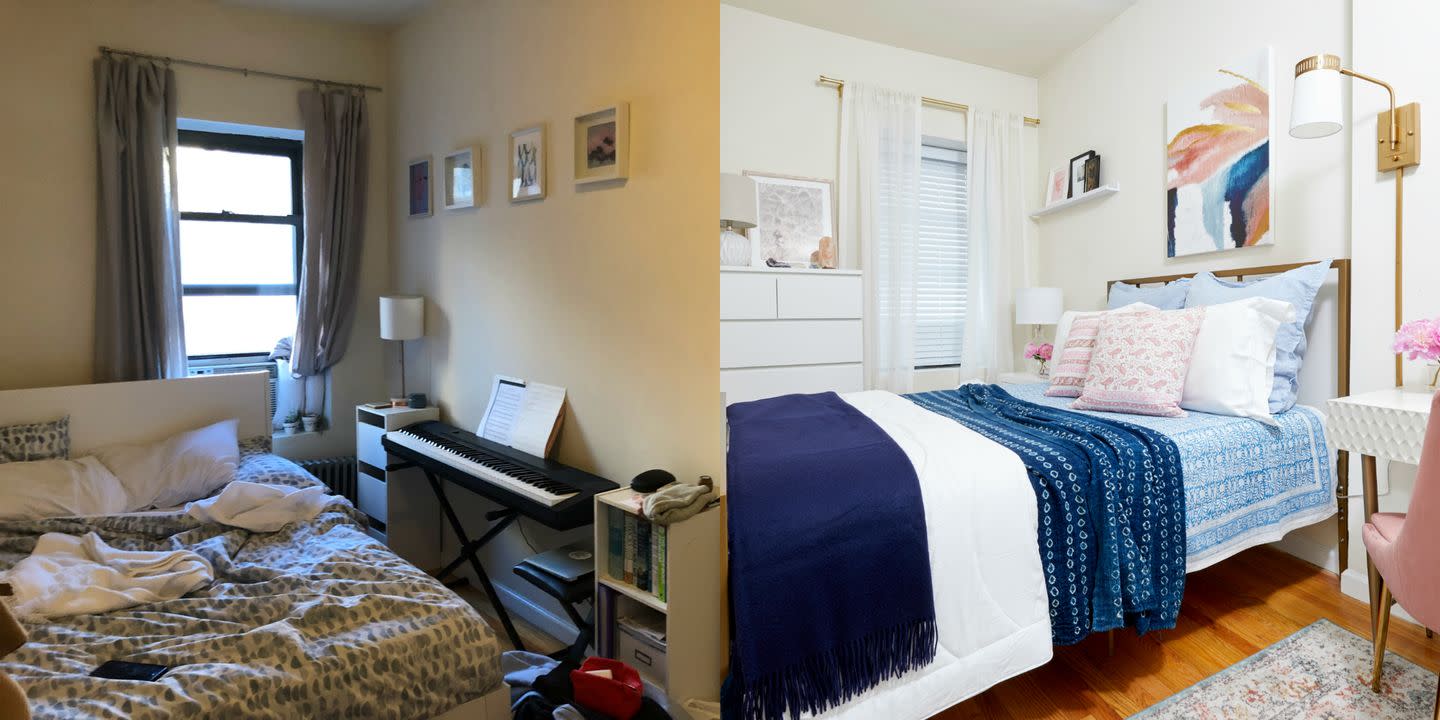