Martinez, who he calls by her show nickname “Baby Bekah,” opens the door with her daughter Ruth in her arms, dressed in a t-shirt that reads “UC Irvine Mom” (Martinez is currently finishing her Bachelor’s degree at the school), joking that she isn’t quite ready for Viall’s arrival. She changes into an outfit of head-to-toe Brooklinen loungewear and Viall, also dressed by the brand, challenges her to a runway walk-off in the living room.

The young family’s living space is full of unique pieces that bring life to the sunny space. A midnight blue suede rocking chair sits beside a turquoise couch; a standard black filing cabinet acts as a tall table; and rust-colored, fringed poufs rest on the floor alongside a furry white rug.

After their fashion show, the pair walk to the bedroom, where Viall jokes, “You have a baby, and you’re pregnant, so I know you’re having fun in the bedroom.” He takes a peek at the Brooklinen bedding, feeling the sheets and lying on top of the comforter.

“Oh, please don’t go through our bed,” Martinez says to him with faux-annoyance, before asking, “Can you please get off the bed?”

The black, wire-frame bed is dressed in a grey and white striped comforter and a colorful quilt. Beige, linen curtains hang on the windows and colorful art decorates the walls. The entire apartment is filled with of potted and hanging plants.

Back in the main living area, Martinez tells Viall that the home was built in 1920, making it 100 years old this year. She shows him her red-brick fireplace, which is surrounded by white and black designs and some of Ruth’s dolls and toys. “[You’re] already doing better than Ashley and Jared, because [the fireplace] is real,” Viall jokes of the Bachelor couple, whose home he toured previously. Birthday cards, candlesticks, a Fiddler on the Roof record and more chic trinkets sit atop the mantel.

On the other side of the room, a glass-encased bookshelf houses dozens of color-coordinated books. “Grayson has actually read most of these,” Martinez says. Viall then points out the vintage, wooden TV stand beside the bookshelves. “This is from my grandparents, they handed it down to me,” she says.

An elegant, full-length gold mirror rests on the floor. Viall notes, “Every great influencer needs to have a little vanity in their life.” Martinez, who has over 600,000 followers on Instagram, tells him that she needs it for “doing ads and that kind of thing.”

RELATED VIDEO: Dr. Oz Says Marrying Wife Lisa Was the ‘Best Thing I’ve Ever Done’: Inside the Mansion They Built from Scratch 20 Years Ago

In the kitchen, she walks Viall around where she and her family “spend a lot of [their] time,” and Viall zeroes in on a laundry pile in the corner. “Looks like that’s been stacking up for a couple of weeks!” he jokes. “Do we have to film this area?” Martinez responds. “It is a tour, Bekah,” he deadpans back.

The episode ends with Martinez asking Viall to hold Ruth for a second, which he does — but the little girl isn’t exactly into it. She cries and points after her mom, while Viall says, “I’m going to give you a bit of life advice right now… you can’t always have what you want.”

This and future episodes of Reality TV Apartments can be found on Nick Viall and Brooklinen’s social media pages.

An Eclectic Home With “Good Vibes” and Personality to Spare

Tue May 26 , 2020
There are DIY wannabes—and then there’s jewelry and fashion designer Ambre Dahan, who purchased her dream five-bedroom home in Los Angeles, then designed and decorated the entire thing herself. As in, without a contractor. “I painted everything. I redid all the bathrooms. I redid the kitchen. Put gates outside. I […] 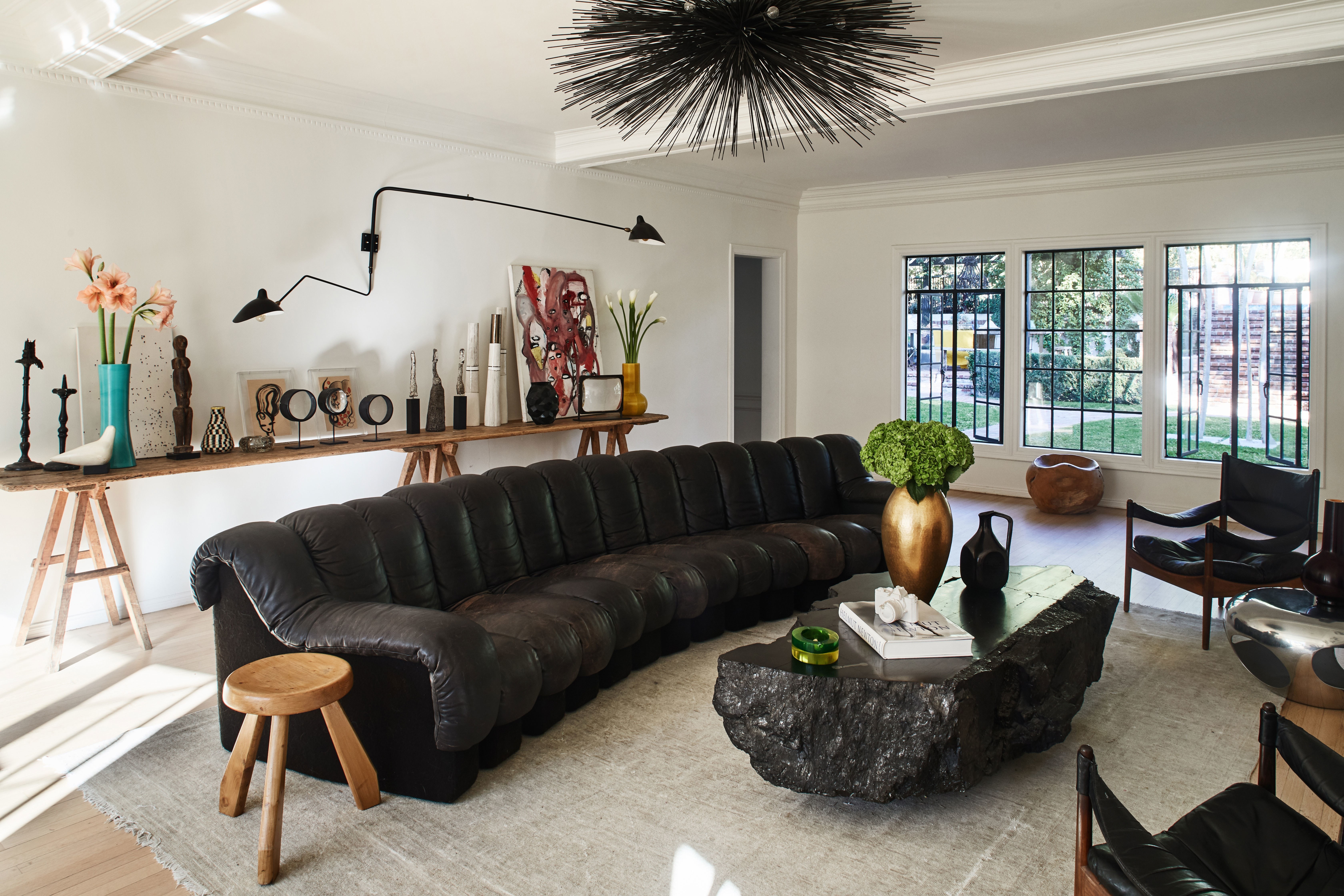