The 787 Dreamliner is one of Boeing’s most popular twin-engine wide-bodies thanks to its fuel efficiency, lower operating costs, and passenger-friendly amenities, which have proven to be endearing qualities for airlines and private owners alike.

As with all of its bestsellers, the manufacturer also offers the aircraft as part of its Boeing Business Jet line-up, which caters to the ultra-elite that require airliner-sized private jets when they travel. Unlike its wide-body siblings, however, the 787 Dreamliner can make its flyers feel good about taking to the skies in a flying mansion thanks to fuel-efficient engines and aerodynamically-friendly features that lower overall fuel consumption.

With a $200+ million price tag, the business jet variant of the Dreamliner can currently be found flying in the fleets of high-end charter operators, national governments, and billionaires with cash to spare. The government of Mexico currently has a 787 in its fleet, valued at around $130 million, that it is currently trying to sell as part of a government spending reform initiative under President Andrés Manuel López Obrador.

In the airline world, the Dreamliner can typically hold upwards of 200 passengers, depending on configuration, which leaves a lot of room to work with when a private owner decides to purchase the plane. Among the three Dreamliner variants on offer, the average space available is around 2,500 square feet.

Take a look at some of the designs that firms have dreamt up just for the Dreamliner.

The Boeing 787 Dreamliner was a game-changer for Boeing as it introduced new fuel-efficient technology combined with a slew of passenger-friendly amenities.

It immediately became a favorite among airlines including launch customer All Nippon Airways, Norwegian Air, American Airlines, and United Airlines.

The first true next-generation wide-body, the program easily racked up over 1,000 orders, despite initial troubles with the aircraft.

The jet also saw success in the private realm, with the Boeing Business Jet 787 offering an unparalleled efficiency in the private jet realm for an aircraft of the Dreamliner’s size.

Boasting a range of over 10,000 nautical miles for its smallest variant, nearly any city in the world is accessible with a single flight, including on city pairs like New York-Singapore, Cape Town-Los Angeles, and Dubai-Honolulu.

Here’s Mexico’s 787 Dreamliner, currently on sale for around $130 million.

Read More: Take a look inside the $218 million Boeing Dreamliner private jet the new president of Mexico is selling because it’s ‘too lavish’

Designers tasked with crafting the interiors have been able to get creative with the Dreamliner business jet. Here’s a design currently implemented on Chinese aircraft operator Deer Jet’s 787 Dreamliner.

The design took nearly three years for designer Jacques Pierrejean to craft and install in the jet, which can seat 40 passengers.

Deer Jet’s Dreamliner is a charter, one of the few available in the world. The aircraft has been known to be charted by governments that don’t have their own VIP transport planes.

The benefits of flying on a Dreamliner over other Boeing private jets is the enhanced focus on passenger-friendly amenities that make the ride more enjoyable. The cabin altitude on the Dreamliner is lowered to 6,000 feet, allowing for more humidity and less dehydration, which lessens jet lag.

And as this jet is meant to traverse multiple time zones at a time, that technology likely comes in handy often.

Other designs from Pierrejean include this one featuring a more casual living room area lined with couches and coffee tables, complete with a cove ceiling.

Even with seating for 40, the Dreamliner is also large enough for its own master bedroom, like this one envisioned by Winch Design on the first BBJ 787-9, the middle child of the Dreamliner family. As this jet can fly well beyond 18 hours, the bed comes in handy.

Like most Boeing jets, this Dreamliner comes with a full master bathroom complete with a walk-in shower and two full vanities.

Other designs include this sleek Azure concept from Greenpoint Technologies. This award-winning design takes the Dreamliner to its maximum potential with a master bedroom with two guest suites, a private office, and a spa, among other features.

Here’s the main entryway for the jet, located at the second boarding door just ahead of the engines.

And with this oversized bed, it’s hard to tell that you’re still on board a plane traveling at over 500 miles per hour when you wake up.

It may not be the largest but the possibilities are endless for the plane that can efficiently fly nearly anywhere in the world without making a stop.

Mon Jun 1 , 2020
With a rare 360-degree view of Cannes and the Lérins Islands, this family residence is full of natural light and a color palette inspired by the Mediterranean below. Designed by young interior architect design duo Humbert & Poyet, the house is the perfect expression of indoor-outdoor living. Founded by Monacan […] 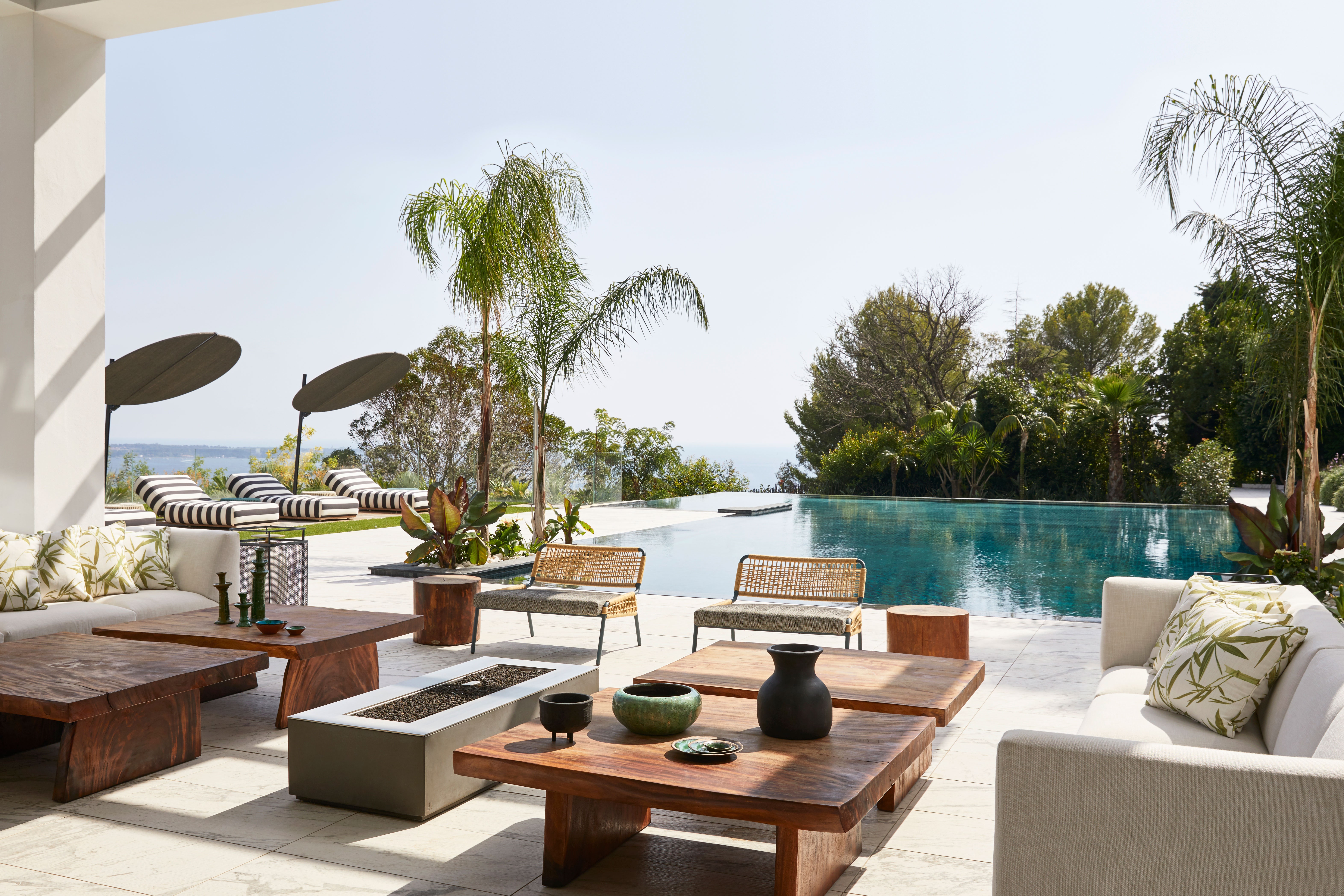