In 1972, architect Michael Reynolds came up with an unorthodox approach to solving what he perceived as a catastrophic ecological crisis. It was a mere two years after the creation of the Environmental Protection Agency, long before conversations about eco-conscious design became fashionable. Still, the newly graduated architect took one look at the sheer volume of garbage the United States was producing and decided to take matters into his own hands—quite literally. The result was the Thumb House, a desert dwelling built out of roughly 70,000 discarded beer and soda cans that were wired and mortared together. “The Thumb House was all over the press, but it wasn’t a story about recycling. It was about a crazy idiot on the mesas of New Mexico building a home out of garbage,” Reynolds says with a laugh. “I was called a disgrace to the architectural community.”

Undeterred, Reynolds continued to tweak his approach to what he calls radically sustainable architecture. In the intervening decades, his designs have grown more sophisticated and his ideas more widely accepted. To date, Earthship Biotecture, his firm headquartered in Taos, New Mexico, has created more than 1,000 highly energy-efficient houses in more than 40 countries around the globe, used for everything from luxury rentals to disaster-relief shelters.

These Earthships, as Reynolds calls them, take the rudimentary concept of the Thumb House to a whole other level. Made of repurposed tires, bottles, and cans bound together with natural materials like adobe, each building generates its own electricity, processes its own sewage, collects rainwater, and maintains temperature without any additional fuel. More advanced Earthships also have the capacity to grow hydroponic plants for food, which renders them largely autonomous from the rest of society.

“We pay for power, water, sewage, food, which fuels the economy and makes corporations get richer while people get poorer,” Reynolds says. “If each home were to address what humans need for basic sustenance, we wouldn’t need all that infrastructure. Each building would be an independent vessel, like a ship in space or at sea.”

Such talk may have drawn derision in the 1970s, but in an era when the demand for lavish doomsday-prepper bunkers is skyrocketing, these self-sustaining homes no longer seem so bizarre. According to Reynolds, Earthships are built to withstand earthquakes, hurricanes, and other natural disasters, but that isn’t really their primary purpose.

“I’m not talking about some theoretical doomsday here. I’m just looking at what is already happening. The polar ice caps are melting and raw sewage is going into rivers and pesticides are destroying lakes,” Reynolds says. “Things are getting worse and worse on the planet, and people are starting to come around because they’re worried about survival.” Reynolds is such a believer in his concept that he currently resides in one of the first Earthships in a fully off-grid community of 60-odd such homes on 630 acres outside of Taos. Temperatures in the area range from a blistering 99 degrees to -27 degrees Fahrenheit, but the six-foot-thick walls, convection skylights, and underground ventilation tubes help keep the interior of his home around a comfortable 70 degrees.

“The new ones are like a BMW compared to my old Ford, but I like my Earthship. It’s taken care of me for 30 years,” Reynolds says. Some of the newer Earthship models are indeed a far cry from the early prototypes. The Phoenix Earthship, for example, is a downright luxurious 5,300-square-foot three-bedroom with WiFi, Netflix, a fish pond, and a greenhouse where banana trees and grapevines thrive. It hit the market a few years ago for a cool $1.5 million, although six guests can book the whole place at rates starting from $410 a night. “Early versions got called ‘hippie housing,’ which is why I started refining them to the point where conservative, conventional people could appreciate them,” Reynolds explains. “Now we get comments on Airbnb like, ‘I just never thought this was possible.’ Having somebody walk into an Earthship on a cold night, take a warm shower, and see bananas growing in their living room impresses them more than any number of words.”

As impressive as the Phoenix Earthship may be, Reynolds acknowledges that it is too far beyond the financial reach of the average consumer to be marketable. More modest options range from the Lemuria Earthship, a one-bedroom available on Airbnb for rates starting at $169 to the Hobbit House, a comparatively snug refurbished 1979 Earthship studio. Though wealthy clients can still order opulent customized Earthships, most options currently available are the more pragmatic Global Model Earthships. By this summer, the firm hopes to debut the new Encounter model, which will be 30% more affordable.

Arguably, the greatest use for Earthships is not in preparing for a global pandemic or societal collapse but rather in coping with more immediate threats to human survival. After the devastating 2010 earthquake in Haiti and the 2014 typhoon in the Philippines, Reynolds saw the opportunity to make a difference. Though most consumers in the United States remained skeptical about concepts like reusing gray water, people in disaster zones were far more willing to embrace the unfamiliar. “After an earthquake, people just want water and shelter of any kind. And, of course, governments and NGOs are building these ridiculous tin shacks, which are basically like ovens, for them to live in,” Reynolds says. “That’s why I started traveling the world and visiting disaster areas, because they allowed us to demonstrate these ideas.”

After the Haitian earthquake, it took a team of 40 local volunteers less than four days to construct a 120-square-foot Earthship out of discarded rubber tires. Needless to say, the Simple Survival Earthship models lack the indoor rainforests of the upmarket versions, but they provide a safe place to stay and enough power to charge cellphones and other essential electronics. Reynolds has taught hundreds of people how to build them, but those unable to attend one of his seminars can download all the necessary blueprints via an app for $9.99.

When Hurricane Maria ripped through Puerto Rico in 2018, obliterating 70,000 homes and damaging at least 300,000 others, Earthship Biotecture launched its most ambitious project to date. More than 200 volunteers have already donated their time to help assemble approximately $80,000 worth of raw materials and a whole lot of tires into Villa Bonuco. Once completed, it will consist of five Earthship structures centered around a garden. Painters and sculptors have transformed the self-sustaining village into something that would look right at home among the works on a fantasy-film set.

“It’s a magical place. It looks like Rivendell, the elven village from Lord of the Rings,” Reynolds says. “It’s literally consuming the garbage from the nearby town. You see them bringing in truck after truck of nonorganic garbage, and it just disappears into the building.” More than anything, Reynolds hopes that his Rivendell will inspire a generation of architects. After spending much of his career fighting red tape and ridicule, he remains convinced that humanity’s only hope is to start thinking differently. “People want to hang on to tradition and dogma, but they’re not going to get us to the future,” Reynolds says. “What’s going to get us through the future is radical change.”

Fri May 22 , 2020
Solutions to storage problems continue to resonate with the market, from storage in the cloud to, now, storage in the ceilings. Katie Canales/Business Insider A San Francisco startup designs modules that store your bed, closet, desk, and nightstand in the ceiling that can be lowered on your command. The systems […] 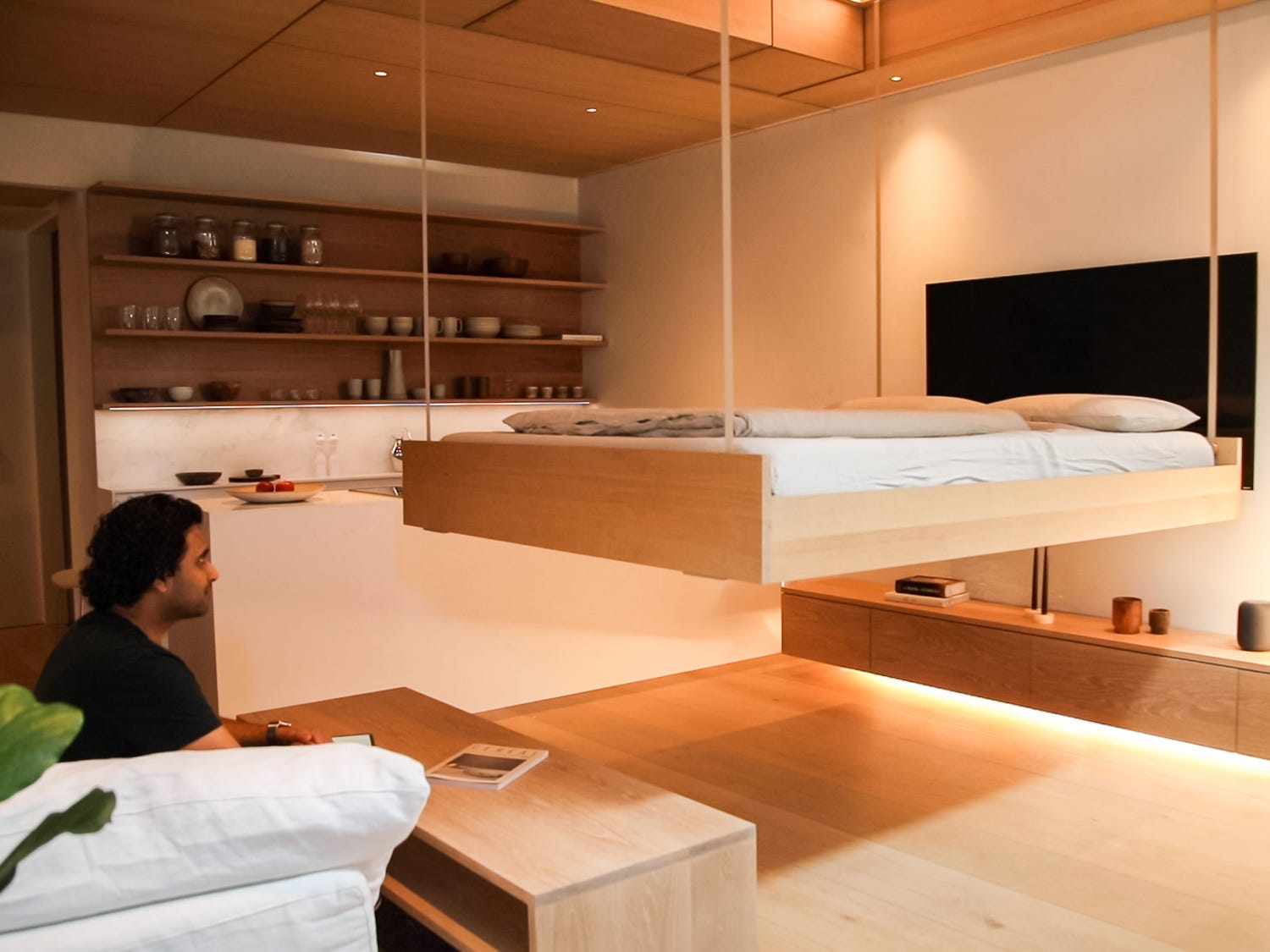