Before I reach the door to Wes Gordon and Paul Arnhold’s West Chelsea apartment, the couple’s dog, Bird, bounds down the hall to greet me. It is just a few days since Gordon, the lauded young creative director at Carolina Herrera, presented his latest runway collection. And hours later,
he and Arnhold, a real estate developer and celebrated glassblower, will zip off to Puerto Rico for a well-deserved getaway—Bird in tow. COVID-19 is still but a faint concern. Inside their entry hall, a symphony of serene and joyous colors draws the eye in. Straight ahead, the High Line’s allée of trees reveals itself through floor-to-ceiling casement windows—a lush green canopy under which the couple sip coffee on their terrace in the mornings. An elegant blush hue coats the walls and ceiling, casting a flattering glow all around. And who could miss the vermilion-lacquered front door—the same vibrant shade that spells out the Herrera name on the labels stitched inside every garment Gordon dreams up. Upon taking the reins at the heritage brand two years ago, the fashion designer immediately replaced the house’s brown-and-cream branding with lipstick red and petal pink, declaring the Carolina Herrera woman bold, confident, and exuberant.

The same could be said of him and Arnhold. The aesthetically minded duo are as known for their creative prowess as for their social calendars—donning Marie Antoinette wigs with Martha Stewart at the Frick Collection one night, fêting the American Ballet Theatre on another. They are gifted entertainers as well. At their weekend home in Roxbury, Connecticut, legendary summer soirées unfold against the pastoral backdrop of horse fields and cow pastures spiked with the occasional mechanical bull. To know Gordon and Arnhold is to know that they live in a wonderfully vivid and richly layered world—warm, fun, elegant, and without pretension.

Yet until recently, their apartment didn’t quite reflect that. “We’d done it in bits and pieces,” Gordon concedes, “but never fully committed.” After four years in situ, they briefly considered moving uptown, pounding the pavement in search of a prewar gem, but ultimately they kept returning to this space. “It combines my love of older, patinaed things with Paul’s of the modern, spacious, and sleek,” says Gordon, highlighting the fact that, while newly constructed, the building is clad in traditional limestone, and the apartment features a classical floor plan where you walk into a foyer instead of a kitchen. Adds Arnhold: “What makes the home so special is that it sits right on the High Line. We have three walls of windows that look out onto greenery.” As such, “it almost feels like a house in the country,” Gordon continues.

Once they committed to staying put, they called on Stephen Sills, with whom they had collaborated on their Connecticut saltbox to great success. “I think of Stephen as more an artist than a decorator,” says Arnhold. “He’ll sit in an empty room and watch the light change throughout the day before choosing paint colors.” To hear the AD100 designer tell it, it was love
at first sight when the couple walked into his office eight years ago: “Two really handsome young men who I couldn’t resist. They were charming beyond belief.”

Whereas the couple’s country place is a historic piece of Americana, their city residence freed them up “to approach it with a blank slate,” Arnhold explains. The mandate was color and boldness. “Nothing greige, nothing boring,” notes Gordon. They set about the furnishings with an eye toward “pieces we would want to live with forever,” adds Arnhold. The result is a sophisticated mix that spans eras with aplomb. “The ceilings are painted, there’s wallpaper anywhere that wallpaper can be, clashing prints, and irreverence when it comes to periods—we took risks and had fun,” says Gordon. In the entryway, an 18th-century robin’s-egg blue-and-gold console sits under a contemporary Andrew Kuo painting the couple purchased at Art Basel a few years ago. It is flanked by two Renaissance works depicting hunting scenes. Opposite that, there’s a photograph from Laurie Simmons’s Love Doll series, for which Gordon traded clothing back when he had his own label. “The best thing he ever did,” Arnhold quips.

The jewel box of a den reveals a deep eggplant sofa alongside midcentury Brazilian chairs. But the pride and joy of the room is a wall of rare early Meissen porcelain the couple inherited from Arnhold’s late grandfather Henry, a patron of the arts. “Wes and I are lucky enough to have a small display here at home,” he says. The pieces are rich with sentimentality: Arnhold’s great-grandparents started the collection in Dresden, and his great-grandmother saved it from Nazi destruction when she escaped to America; Henry Arnhold preserved and expanded on it, donating the lion’s share to the Frick. Yet despite its miraculous existence, the young Arnhold remembers it being lived with and enjoyed “floor to ceiling, wall to wall,” a tradition he and Gordon are now carrying on. “I think the biggest sacrilege to Henry would be if these pieces ended up in his grandchildren’s apartments behind a glass vitrine,” notes Gordon. “So we put them in a room we spend a lot of time in.”

The open living, dining, and kitchen areas lend themselves well to entertaining, such as when the couple hosted a group of 25 the night before the Carolina Herrera show. A geometric-patterned Swedish rug from the ’70s lays the groundwork, with its soft shades of blue, green, and pink echoed throughout the home, including a mantel exquisitely framed with hand-painted Florentine tiles. Guests can take their pick of seating, from a Gustavian sofa to a Frank Gehry cardboard lounger, or the Charlotte Perriand dining chairs that get pulled over to the living room during parties. “It’s never a seated dinner,” says Gordon. The kitchen island becomes a buffet, and plates—such as the Carolina Herrera x Cabana ones he designed—end up on people’s laps. “It’s a credit to Stephen that this room feels just as lovely if it’s the two of us as when we’re having
a big group over.”

The couple’s far-flung travels also inform the mood. In the cabana-striped kitchen, a windowsill with a view of a Romanesque Revival church is lined with pottery assembled on various sojourns: jugs from Comporta, Portugal; a vase picked up in Morocco; a Picasso pitcher. They admit that the ever-evolving nature of their collecting style keeps Sills on his toes. “We’re on a constant text thread,” says Arnhold. Adds Gordon with a laugh: “He has to try to put a leash on us.”

“What’s wonderful about the two of them,” Sills asserts, “is that they have different tastes and perspectives. Wes is romantic and loves old-school decorating while also being
hip. And Paul is a modernist who appreciates contemporary glass houses and blows that beautiful modern glass. I think the combination of the two of them works very well, and I’m kind of the mediator to pull it all together.”

One vignette that they all can agree on is an antique side table laden with Arnhold’s bright glassware. “It’s the prettiest part of the dining area,” says Gordon, noting the way the
light shines through the transparent, elegantly crafted vessels during the day. When Arnhold brings new creations home from his studio in Red Hook, Gordon is tasked with styling them. “It’s hard,” the fashion designer sighs, “because once I make a perfect arrangement, some of the pieces inevitably sell.”

Sills likens the wondrous mix of it all—Art Deco, Jeanneret, Lalanne, contemporary treasures—to “a new vibe. The mis-match of different things is hard to do successfully, but if you manage to,” the decorator explains, “it’s magical.” For Gordon and Arnhold, their rooms are also deeply personal. “Being in a space that brings you joy and feels like you is so important,” says Gordon. “This apartment is our oasis, our spot of tranquility in our busy New York lives. When we open the front door, we really feel like we’re home.”

Tue Aug 4 , 2020
Come September, most parents are more than ready to load their kids onto the school bus. And for little people, going back to school often comes with a lot of excitement…and some jitters. Especially this year, when virtual learning might become the new norm and “going to school” may well […] 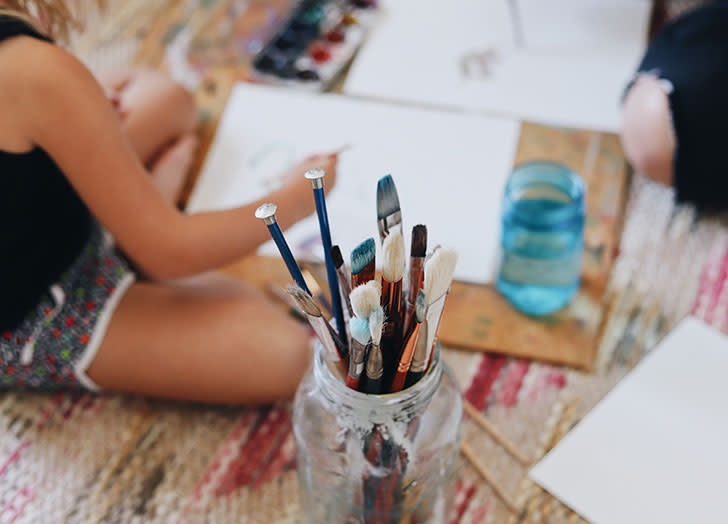