Tucson businesses and residents seeking building permits and development plans are facing long delays, as the city’s permitting agency has been overwhelmed by record-high construction activity and staffing challenges.

While it will take time to hire more people and improve service, developers and other permit users are encouraged by the effort to beef up staffing and overhaul and modernize permitting systems, with a new digital permitting system set to go online in October.

As it is, high demand coupled with staffing shortages have pushed permit and plan review times for development plans to two to three times as required under city ordinances, Tim Thomure, assistant city manager overseeing the PDSD, told the council at a June 7 study session.

“We’ve committed to a time frame of 20 days to review for most things but we’re not currently meeting that consistently,” Thomure said in an interview. “There are always instances where things take longer, a lot of projects need multiple reviews to dissect them, but typically the longest (wait) on specific projects is 90 days, and most are less than that.”

After discussing the issue on and off for months, the City Council at its June 7 meeting approved a plan to immediately fill 15 open positions in PDSD and allocate $250,000 to digitize the department’s microfiche permit records and $1.2 million annually to fund 14 new technical and professional staff positions.

In a sense, Tucson is a victim of its own success, as the city has ridden a wave of residential and commercial development since 2015, cresting just as the COVID-19 pandemic caused shutdowns and lingering worker shortages.

The value of construction projects handled by the department’s planning section rose nearly 98% from 2015 to 2021, reaching a record $848 million in 2020 before dropping to about $747 million in 2021, according to a departmental service review presented to the mayor and council.

The PDSD has moved to hire additional staff since 2020, though filling those posts has been a challenge, Thomure said.

PDSD since 2020 has added 32.5 full-time equivalent positions, growing its staff by 50% to 93.5, including 21.5 nonpermanent contract worker positions.

The ongoing digitization of paper and microfiche records and the expected October launch of the new EnerGov Permitting System, will help PDSD get back on track toward the end of the year, Thomure said.

“We are on a much more positive trajectory,” he said.

“We’re going to be in a better place three months from now and even better than that six months from now,” said Thomure, who met with local industry leaders to discuss the changes as recently as last week.

Local developers and business leaders say they’re encouraged by the city’s moves to beef up the permitting process, amid long delays they fear could hamper economic development across Tucson.

David Godlewski, president of the Southern Arizona Association of Home Builders, said Tucson has long lagged Pima County and other local municipalities in processing development plans and building permits, but things began to get further bogged down about two years ago.

“In the last 18 to 24 months, there have been some major challenges in getting plans reviewed and approved in a reasonable time — what took days or weeks is now taking weeks or months,” said Godlewski, who has headed SAHBA for more than a decade.

Godlewski said one developer told him he just got initial comments on his development plan back from PDSD on an application submitted seven or eight months ago.

And simple building-permit applications that Pima County typically turns around in 48 hours are taking Tucson weeks to review, he said.

Thomure said more complex plans can take months if revisions are sought but he hadn’t heard of any project delays of up to seven or eight months.

Godlewski said he believes Planning and Development staff are working as hard as they can, but it’s painfully obvious that the department lacks the basic resources to process applications in a timely manner.

The system puts smaller projects behind larger ones, causing unnecessary delays, and when an applicant resubmits after adding requested information or correcting errors they end up at the back of the line, Godlewksi said.

The CEO of the Tucson Chamber of Commerce, Michael Guymon, said the group and developer members had worked with the city to get review times for single-family home developments down to 28 days a few years ago.

But now those timeframes have tripled or even quadrupled in some cases and the city has been telling applicants more recently it will take 90 days for a review, Guymon said.

Guymon, who spent more than seven years with the local economic development group Sun Corridor Inc. before joining the chamber, said he’s concerned that Tucson could miss out on attracting significant new businesses or expansion opportunities if companies don’t think they can get their projects approved in a timely manner.

“Speed to market is critical when it comes to cities and communities to compete with each other and attract business and industry,” he said. “I get concerned when we can’t meet certain time frames companies have as they want to expand or relocate into new markets.”

Existing businesses looking to expand also need certainty that they can proceed with their development timelines without months of delays, Guymon added.

The longtime head of a local design consulting firm said he was dismayed when PDSD started telling permit and plan applicants it would take 90 days for review.

“Taking 90 days per review, and you can generally count on two reviews, if the norm had been 30 days which is kind of the standard, that’s an extra four months before it goes to construction,” said Bill Carroll, president of Tucson-based Engineering and Environmental Consultants Inc.

But Carroll said most members of the development community understand Planning and Development is working to resolve the backlog, giving Thomure high marks for working with the industry and focusing on both near- and long-term solutions.

“The attitude at the city of Tucson has swung dramatically to the positive over the last few years,” he said.

During a recent meeting, Thomure said the PDSD is working to speed projects through the review queue by assigning its two most experienced plan reviewers to make initial reviews and comments, and have other less-experienced reviewers check applications resubmitted with changes for compliance, instead of waiting for the original reviewers.

“That should really speed things up,” Carroll said.

The department also is looking deeper into the application queue to spot resubmissions with simple changes that can be approved quickly, Thomure said.

In the longer term Thomure wants to develop a tracking system to view the real-time status of all applications at a glance.

Besides upstaffing, PDSD has made some key service improvements in recent years:

The Tucson Development Center opened last year and centralized all review staff from PDSD, Tucson Water, Tucson Fire and Department of Transportation and Mobility into one customer-service facility in the Public Works Building at 201 N. Stone Ave.

The PDSD also rolled out remote video inspections prior to pandemic for some building inspections and expanded that service to all inspections during 2021.

The city partnered with Pima County and the National Renewable Energy Laboratory to allow same-day permits for residential solar installations, with more than 2,000 permits expedited through that application process since its launch in 2021.

Thomure said the new EnerGov Permitting System, which will be used by PDSD and other city agencies, should significantly streamline the permitting process.

The city selected the new system, made by Tyler Technologies, in 2018 but its installation was delayed partly due to COVID-19.

That was a blessing in disguise, Thomure said, as Tucson will get the recently released new version of the platform and latest software ahead of other cities.

The city has had to revise some of its procedures before switching to the new system, which will undergo testing starting this month, he said.

“We had a lot to do to modernize and streamline our processes, because you don’t want to take a bad process and put it into a new system,” Thomure said, adding that further improvements are planned once the new permitting system is in place.

Meanwhile, the project to completely digitize permit records now kept on microfiche — expected to cost $250,000 annually over four years — will provide online access to the public.

Carroll, the design consultant, said he worries that the city will be able to fill the vacancies and planned new positions at Planning and Development as employers across the city and state struggle to find qualified workers amid labor shortages blamed on COVID-19 and a booming economy.

“They’re facing the same thing everyone in Tucson is facng right now,” he said. “We turn work down on a weekly basis because we can’t find staff.”

Thomure said plans for a stepped-up recruiting effort, market-based wage offers and the willingness to train new workers will help the city fill the vacancies and new positions at PDSD.

“There’s probably a decent amount of folks in town with those skill sets, or the ability, and we’re willing to do the training is where we can better exploit the local talent by taking the long-term view,” he said, adding that Tucson also remains an attractive market for workers willing to relocate.

The PDSD has supplemented staff with contract workers, which now comprise about a quarter of the agency’s staff, but its tough to get those workers these days as well, Thomure said.

SAHBA’s Godlewski said improvements at PDSD must go far beyond upstaffing, to restructure processes like creating different queues for specific types of permits or project sizes, for example.

The city plans to do a deeper dive into process improvements once the new permitting system is in place, Thomure said.

“We’re in this first phase now, with the resources we have, and when we have the additional resources on board and trained, we can go further down the path,” he said.

Get local news delivered to your inbox!

Mon Jul 4 , 2022
[ad_1] Bed Bath & Over and above has ousted its chief govt immediately after the US residence goods retailer posted an additional drop in quarterly revenue, in information that knocked its stock value down far more than 20 for each cent. Sue Gove, an unbiased director, was appointed interim chief […] 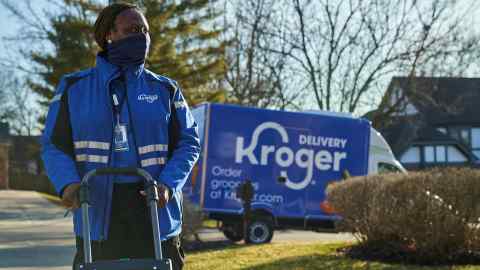