A billionaire donor’s design for a mega dorm that would pack UC Santa Barbara students into largely windowless rooms has drawn widespread criticism and prompted the resignation of a consulting architect.

The proposed building, dubbed Munger Hall after donor Charlie Munger, would house 4,500 students in a 1.68 million-square foot complex with only two entrances. The project is expected to cost $1.5 billion.

Living spaces in the building would be split into apartments of eight single occupancy bedrooms, 94 percent of which would not have windows.

The plan ultimately led architect Dennis McFadden to resign from UC Santa Barbara’s design review committee, where he has served for nearly 15 years.

In an Oct. 24 resignation letter to the committee that leaked on the image sharing site Imgur, McFadden described the project as a “social and psychological experiment with an unknown impact on the lives and personal development” of students.

“The basic concept of Munger Hall as a place for students to live is unsupportable from my perspective as an architect, a parent and a human being,” McFadden wrote.

McFadden also raised concerns in the letter over the lack of committee input in the project, and Munger’s influence over the building design.

Munger, 97, donated $200 million to the project in 2016, stipulating that he would bankroll the residence only if it was built to his design.

He told the UC Board of Regents in 2016 that in lieu of windows, dorm rooms would have artificial “window” monitors like the portholes on Disney cruise ships, where “starfish come in and wink at your children.”

The building would also include recreation areas, a full-service restaurant, and according to a California Environmental Quality Act report, a space to store 570 surfboards.

Munger dismissed criticism about the amount of influence billionaires have on projects like the mega dorm, telling MarketWatch that he’d “rather be a billionaire and not be loved by everybody than not have any money.”

Despite the backlash, UC Santa Barbara intends to move forward with the planned building.

“It is meant to build community, encourage peer-to-peer interaction, promote engagement and relationship building, foster an environment of learning and support, and provide necessary resources and amenities to support a 24/7 on-campus living experience,” Estrada said.

McFadden, however, is doubtful of the building’s effectiveness. In an op-ed for the Los Angeles Times, he wrote that the building “attempts to engineer social experiences” by placing communal spaces at the perimeter of the building, which would receive natural light.

He described each apartment as a “sealed” environment, and likened it to “living in a janitor’s closet buried at the center of an Ikea warehouse, with the closest window somewhere back at the entrance.”

Estrada dismissed concerns that the lack of ventilation will jeopardize Covid safety in the building, clarifying that “there is no recirculation of air between student rooms” since each bedroom will be “provided with continuous fresh air supply.” Exhaust air will be vented directly outside.

“One could argue that this may be an improvement in air quality as it does not require a student to open the window for fresh air,” she said.

Social media users were horrified by the plans. Some compared the possible living conditions to guard residences in the dystopian Netflix thriller “Squid Game,” which are similarly windowless.

Others likened the claustrophobic plan for the dorm rooms to prison cells.

Estrada addressed critical assessments of the project as “mischaracterizations,” noting that the building’s evacuation plans comply with fire and building code requirements. The mix of single occupancy bedrooms and communal spaces are designed to provide students with a balance of privacy and social opportunity, she said.

“He has been developing these ideas for many years and on other student housing projects,” Estrada said.

Munger, who does not have an architecture license, previously designed and funded the Munger Graduate Residence Hall at the University of Michigan, which houses more than 600 students. Like the proposed Munger Hall, each apartment of six to seven single bedrooms lacks windows.

CNN reported that students rely on artificial sunlight lamps. Graduate student Luiza Macedo told CNN that she didn’t see the sun for a full week when she had a Covid scare.

One University of Michigan alumni posted in the UC Santa Barbara subreddit recounting their experience in the windowless dorm, warning future students of how much they struggled to wake up without natural light.

Estrada said that the “benefits” of Munger’s approach to student housing are “legion.”

“Mr. Munger enjoys sketching out his ideas and our ongoing responsibility is to interpret and articulate them in drawings,” Estrada continued in the statement. “This design emanates from Mr. Munger’s research and iterative processes to devise a transformational approach to student housing.”

Fri Nov 5 , 2021
It’s on the market for $11.5 million, and whoever buys this recently completed home in Reunion, FL, will be able to move right in and enjoy everything it has to offer. “Every single room is uniquely different. It’s a custom home—and just a real fun house,” says the listing agent, […] 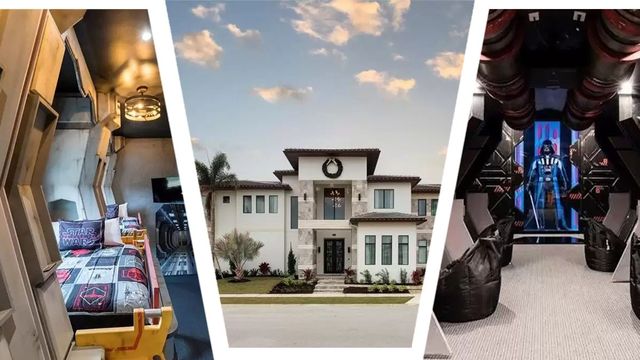